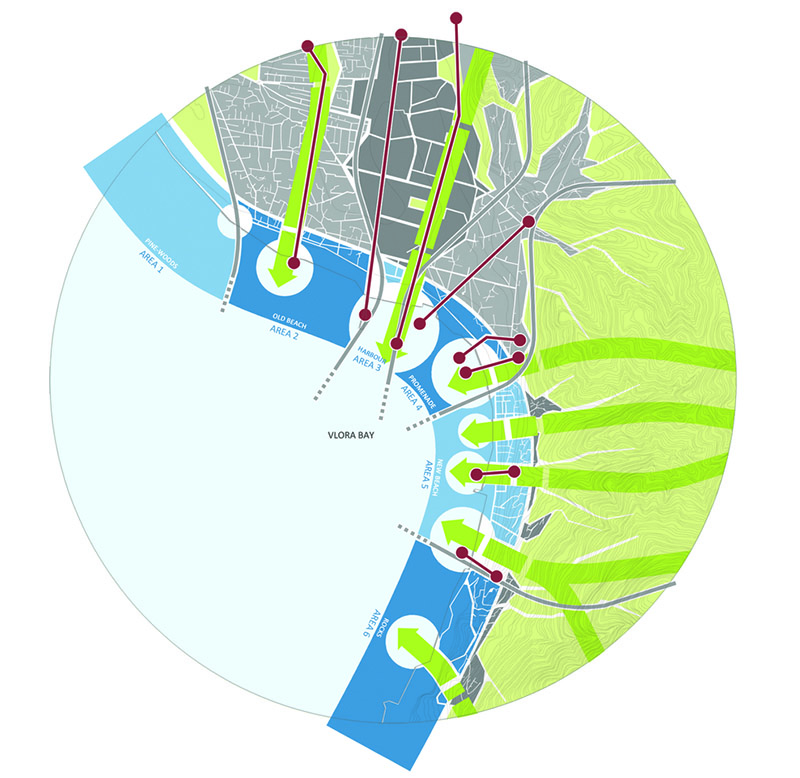 International competition for the new waterfront of Vlora
the natural system and green in general is an important element of the vision. green is considered as a way to stop the further unctroled urbanization, as a tool coonect the different parts of the city, to reshape and heal the landscape from the recent agresive sprawling. green is considered as the missing element in vlora, as in any other part of Albania, e key factor the hepls directly to rise the life quality of the residents beside the overall image of a place. green as a park, as an outdor space for events, sport or just as a natural green that allows continuity between the sea an the interland. this prosal works on this topic, extends it and tries to control it as system that connects and reaches the new waterfront and becomes part of it by penetratin through the existing urban fabric the built system is the most prevailing element of vlora. in principle this is a logical conclusions that can be traced for most of the cities worldwide as they are commonly identified with the built part. our observations are more related to the character of this environment and to the relationships that it creates with the other elements that every city should have, it’s exactly through this links that quality is provided in urban contexts, and it’s also what vlora misses a heavy built city or just unwisely built in some other cases. a built environment informally exploding and imploding that doesn’t communicate with the existing patterns that are definitively there or with the people’s needs, that doesn’t put itself in dialogue even with the main matrix of this place, the reason of the very existence of the city, the sea. the last twenty years of economical and political transition fueled informal that spontaneous developments that have left vlora shapeless without a clear identity. our vision starts exactly by reading the features of the urban fabric, without any prejudice between new and old, informal, planed or vernacular. according to this analysis, vlora is seen as composed of four main bodies, characterized by their patterns: the organic patterns of the informal settlements in the area in between the pinewood, old beach and the train station; the regular grid of the planned city, in between the harbor and the northern historical urban core; the radial grid that diagonally cuts the city in its north east direction, with its star shaped junctions that where seen as potential squares also in the italian studies before wwii; the fourth part developing in the narrow stripe in between the hills and the waterfront. still the less urbanized in precarious balance in between the linear development of the narrow cost, regular grid of the recent massive developments next to the waterfront and the organic extension of the built areas in the hillside. these four parts of vlora are reflected in the waterfront proposal that changes its character by reflecting what is happening behind by connecting the city and the sea in an organic way.
the so called boundaries are the transitory lines in between the different urban environments. they are often traced by the important axis within the city or just as part of the buffer areas were the passage from the different parts of the city occurs. their impact in the waterfront won’t be continuous as the corresponding urban cuts they outline but with a point to point reflection that will be translated in some of the new land-marks that will compose the new waterfront.
circulation is one the most relevant systems, functionally wise, crucial in order to avoid congestions in the inner circulation of the city, especially during summer. vlora has already some characteristic axis: transversal ones, like the main boulevard and the trans-balkanic road parallel to each other culminating next to the sea; and the partial longitudinal road, a continuation of the main axis, that follows the coast toward the southern exit of the urban area. this system of transversal and longitudinal axis is recalled and improved. the present longitudinal road is connected with the other coastal part, parallel to the “old beach” area, and transformed in a complex route connecting the two extremes of the city and our waterfront area, through pedestrian promenade, bike paths and innovative public transport means. a new parallel axis is partly created and partly built by improving existing ones in order to create a by-pass attracting the traffic and allowing a faster passage through the city without interfering in the waterfront. another longitudinal axis than can help partially this traffic direction is also the new road on the hill side passing through kanina. but it is the transversal system that has a real physical impact on the waterfront. this connections are increased in number and capacity. the transversal axis will allow a faster connection between the inner city and the waterfront by stitching them together. the extremities of this lines will culminate inside the public space of the seaside forming the various piers and pedestrian squares along the site. 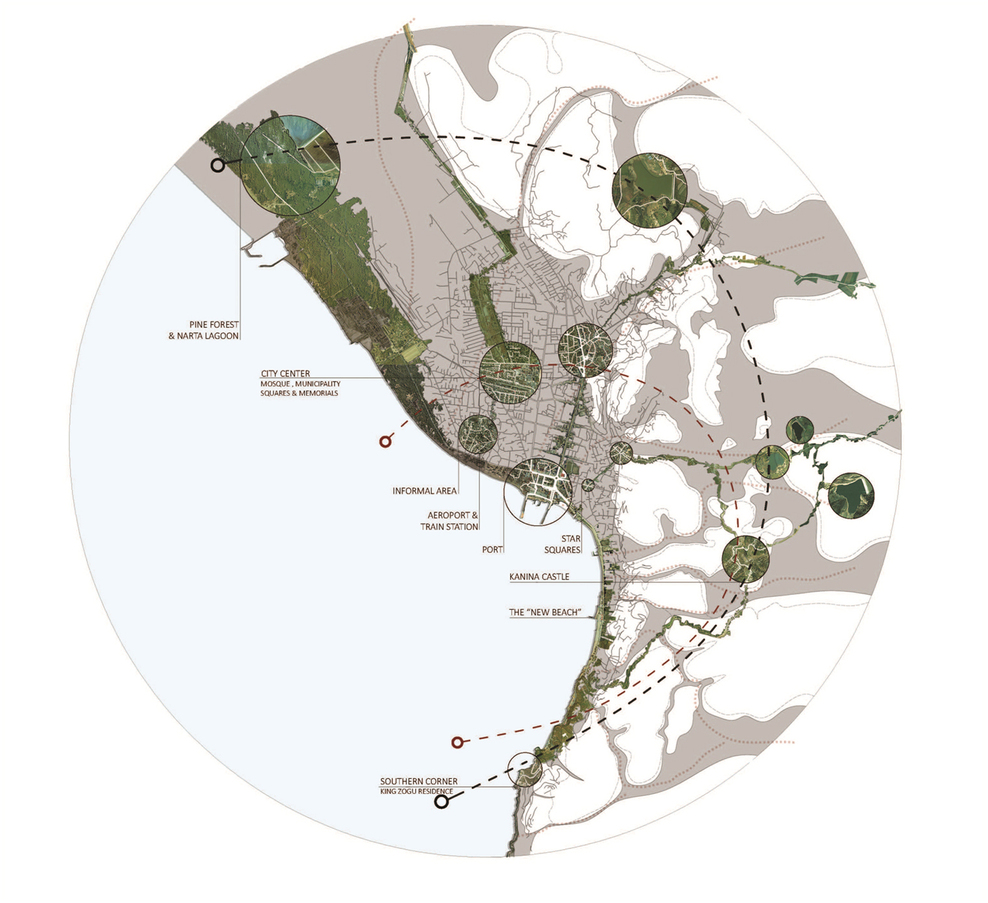 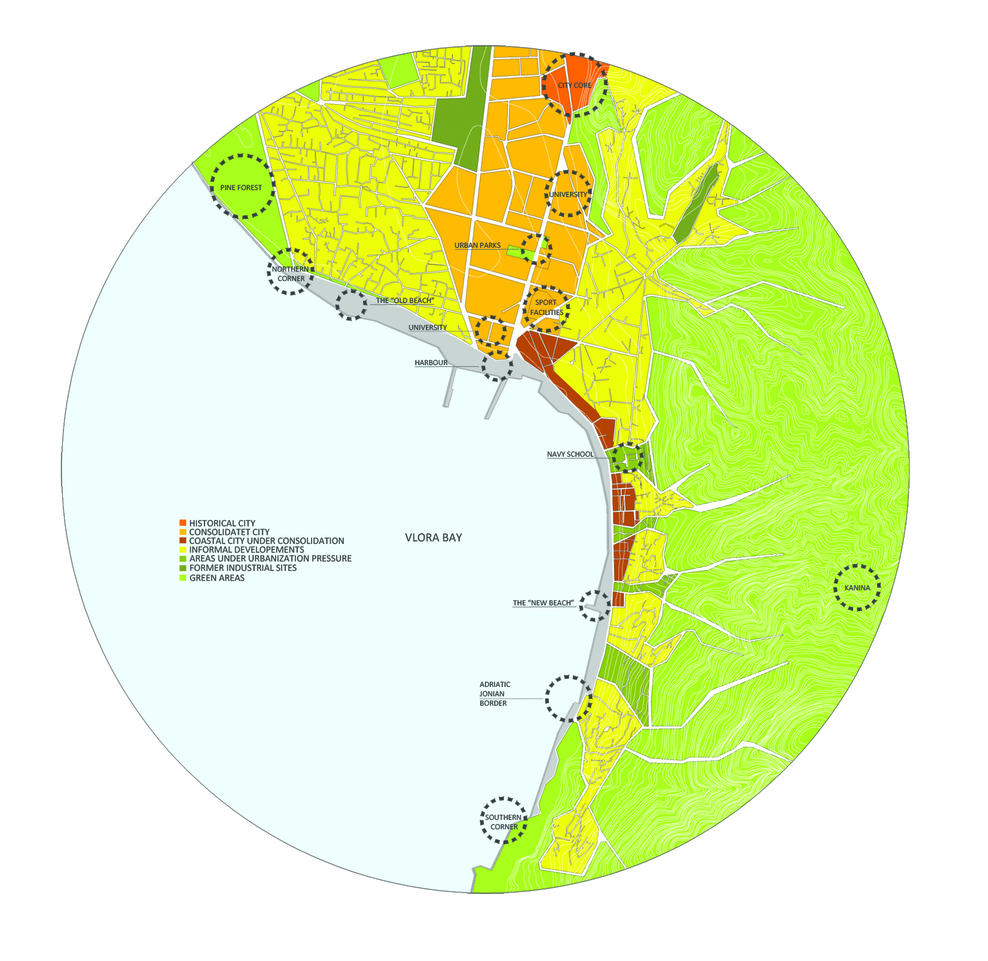 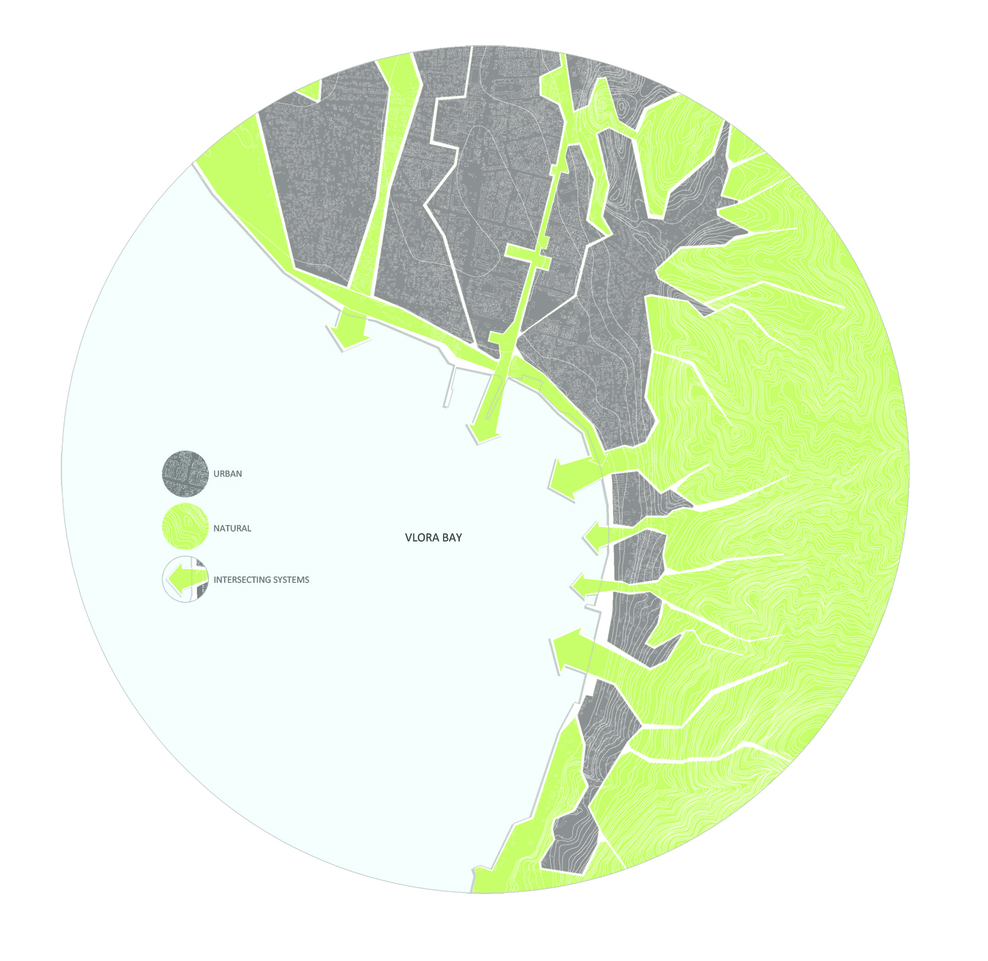 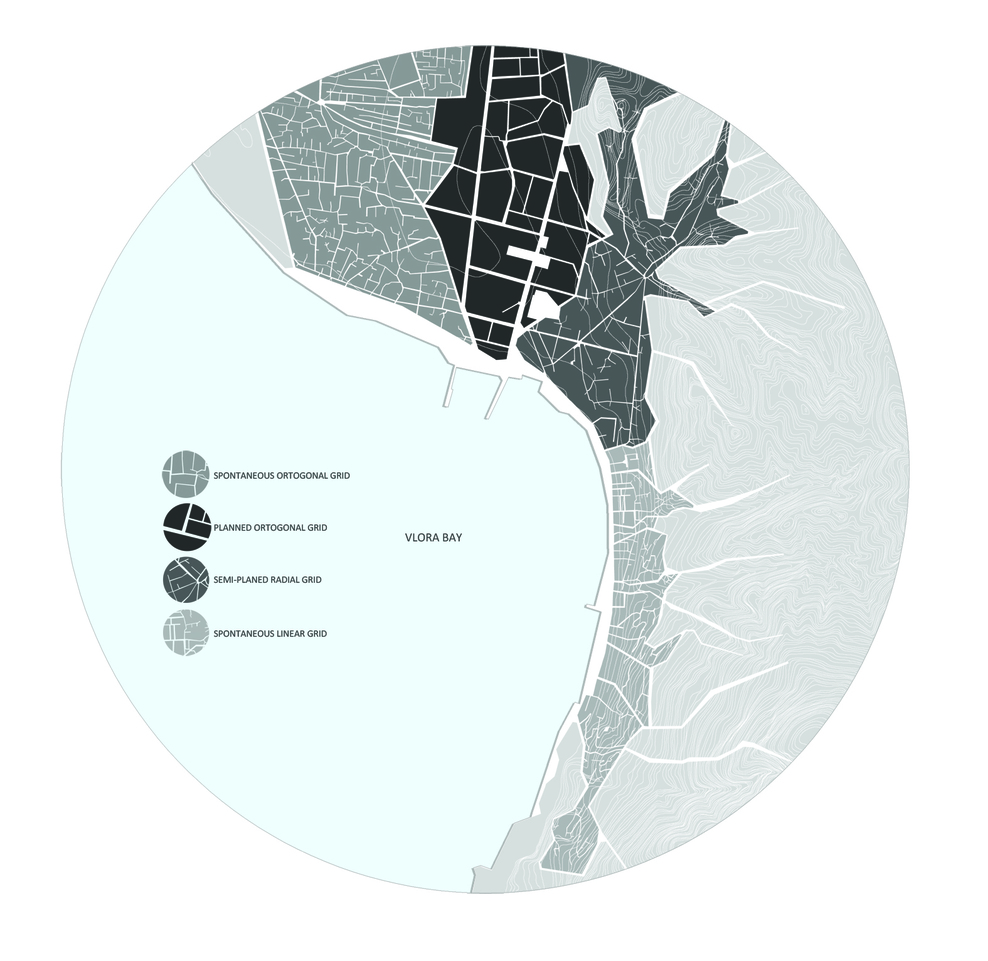 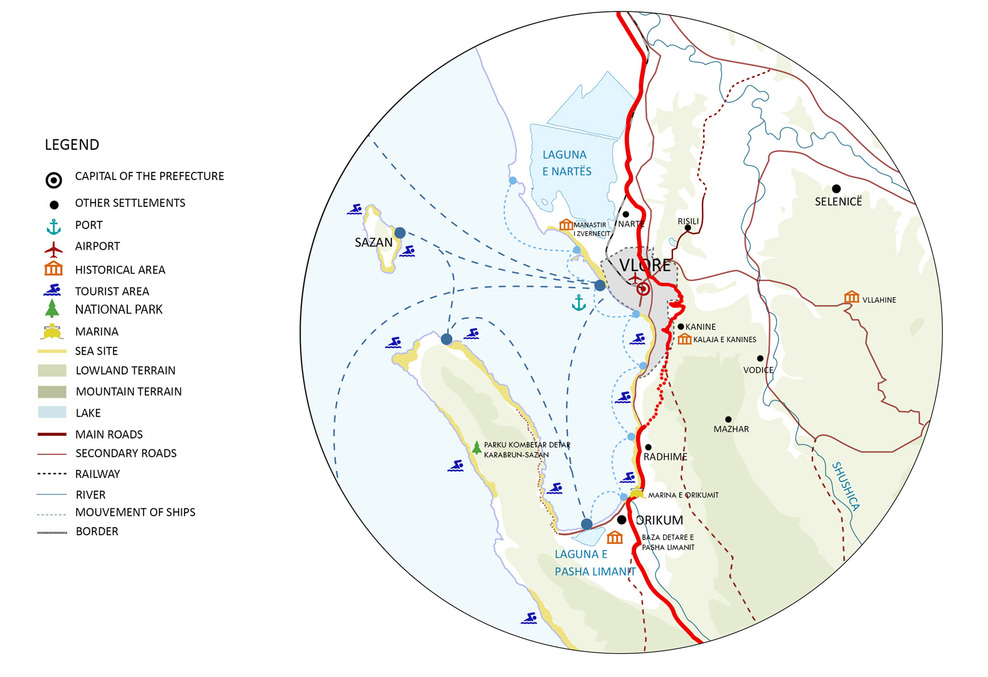 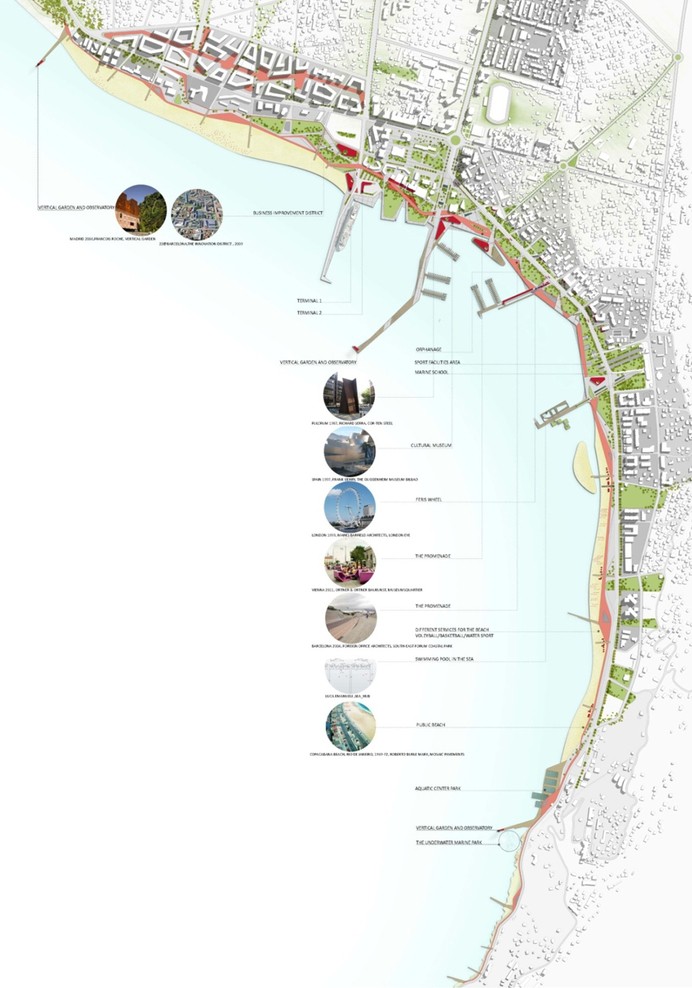 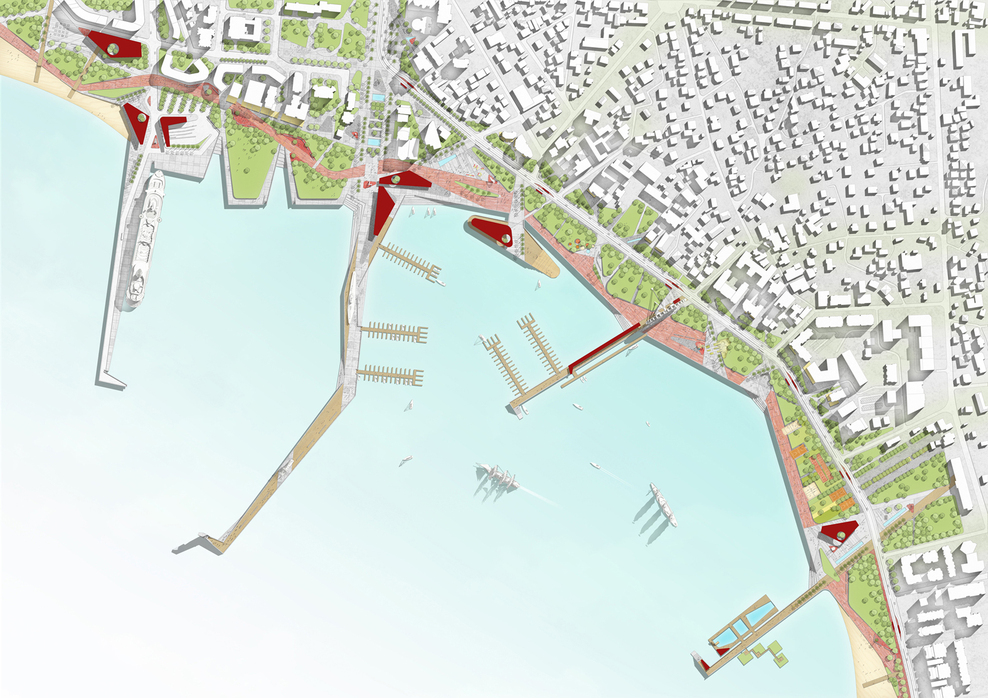 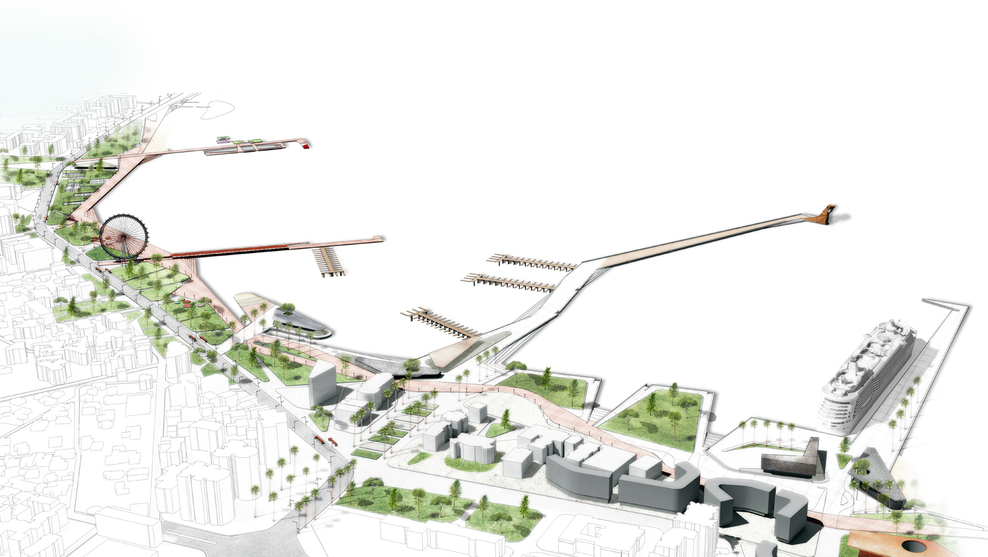 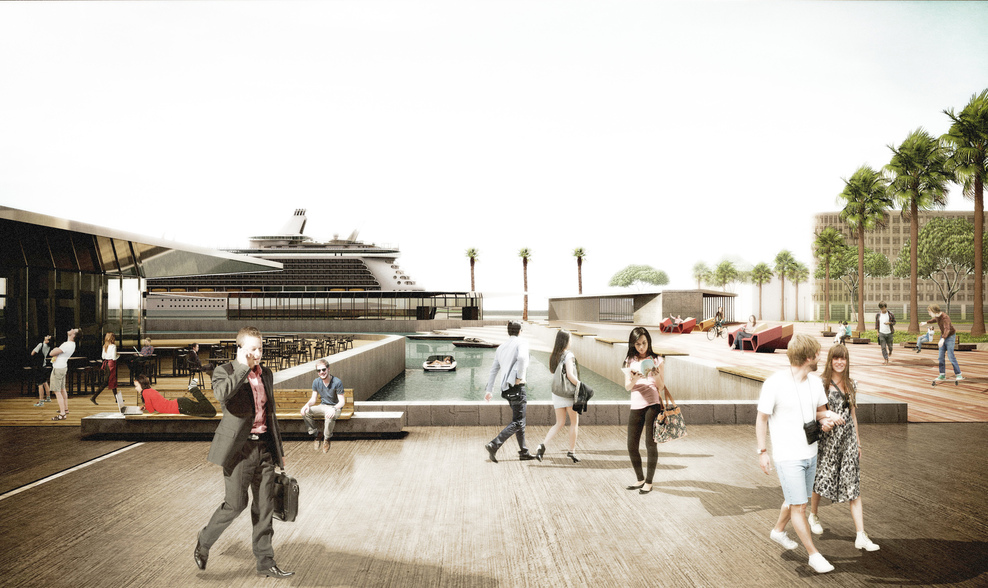 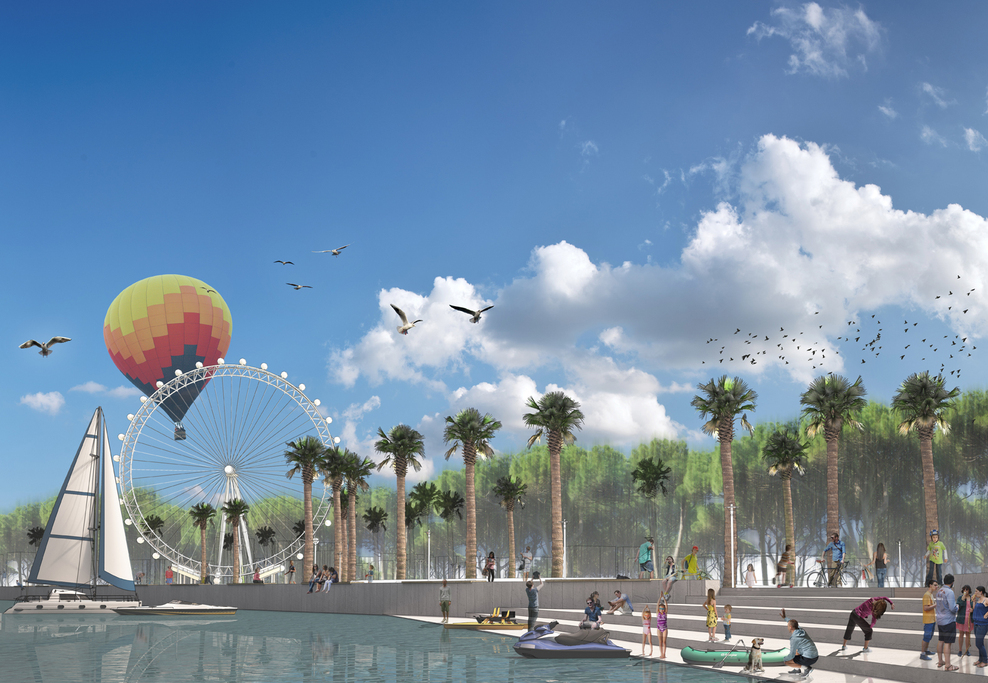 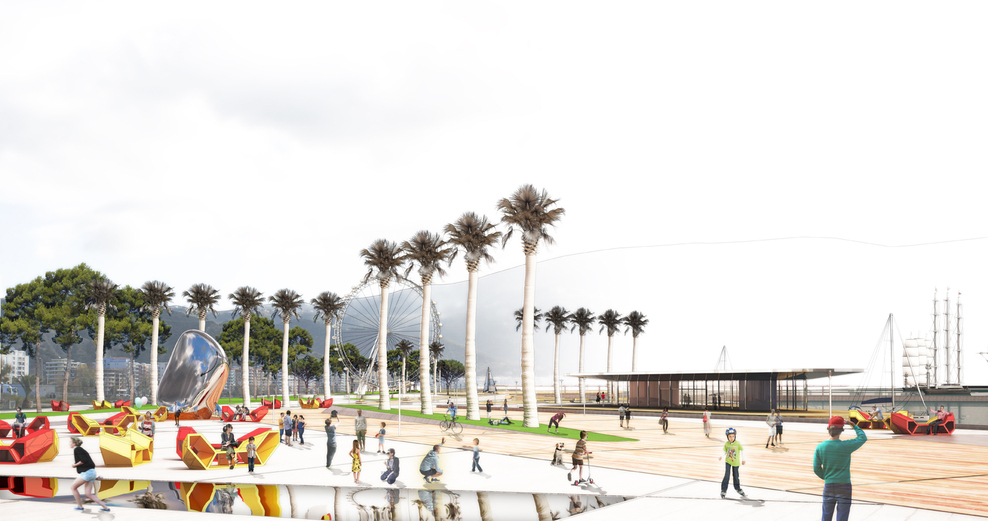