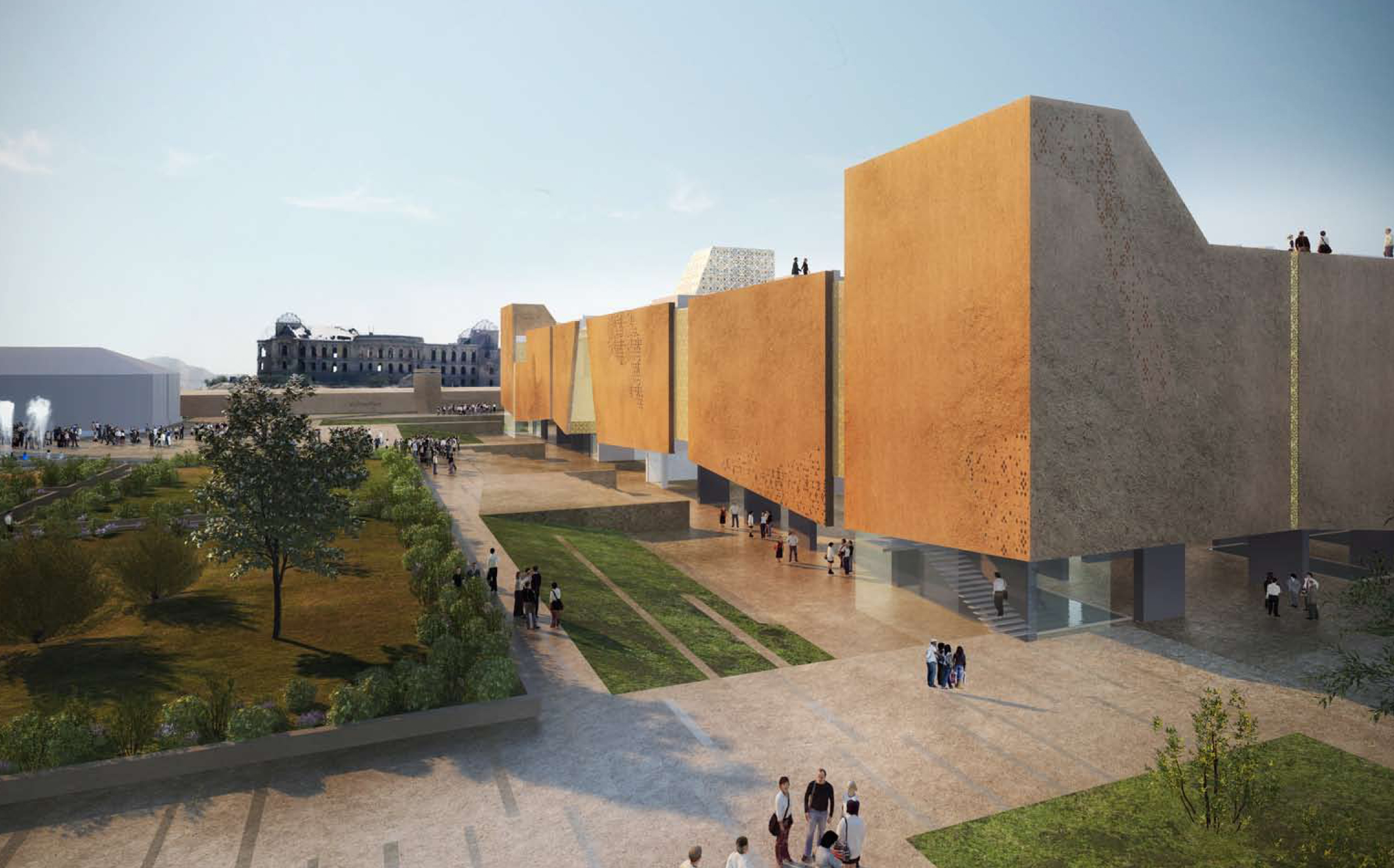 The National Museum – Concept.
The project for the New National Museum of Afghanistan derives from the idea to interpret in a contemporary sense the afghan tradition and to integrate in the
surrounding landscape. Hence the edifice has a double nature: the external folding engages in a direct dialogue with the surrounding landscape, relating to the
proximate mountains and with the local materials and colors, while the interior refers to the traditional representative places in the afghan culture.The prevailing
idea was to embed in a sole edifice the characteristics of the afghan city, also due to the dimensions of such intervention. The museum appears like a piece of
the overall symphony of the city and the visitor experiences it through consecutive sequences of spaces that tell the history of the afghan culture, as if he is
walking through the urban fabric of Kabul or another common afghan city. The architecture of the museum intends to narrate, already through its external
perception, the story contained in its interior.
The facades are much closed outwards, with very few openings, a genuine mural enclosure that tries to perceptually dissolve with the colors of the mountains
in its background, but once entered, reveals the contained treasures, reflecting an unexpected richness. Such color-wise and material-wise richness of the
interior is glimpsed from outside, due to the two decorated towers that emerge from the building’s skyline that also provide ventilation and lighting towards the
interior.The edifice in its external perception attempts to merge as much as possible with the surrounding landscape, like the local cities ‘hide’ from the accessing
road system, but once close to the Museum, it will reveal its spatial and material richness, and to some extent, also its features as an ‘urban monument’.
This particularity of closing towards the exterior, besides referring to the image of a city wrapped in an edifice that reflect the specificities of the domestic local
architecture, also acts as protection from light and heat, a fundamental requisite for a museum. It is also due to this rationale, that a typology of inner courtyards
has been applied, allowing indirect illumination of the exhibitory halls and other premises in general. Additionally, it has been foreseen to lift the edifice from the
ground, aiming to generate a protected and covered public space, serving as a place where to pause, in the entrance or the exit of the museum; the ideal extension
of the open space and garden traversed prior to entering the museum. Being lifted from the ground, the building enables the formation of a vast public
space shadowed and protected by the severe weather, serving as shelter and meeting point. Security is, till the country’s political conditions change, one of the
fundamental elements where the design relies, like indicated in the call, but in the same time, while complying with such standards, the projection of a public
meeting place was retained crucial. The entrance of the museum is indicated by a slit in the façade making reference also to the monumental gates of sacred
Islamic edifices.The mural enclosure of the museum, necessary for security reasons as defined by the call, has been treated not as a mere fencing wall; in the
ground level it highlights the main hall visible in 360°, hence decorated in its internal facade. 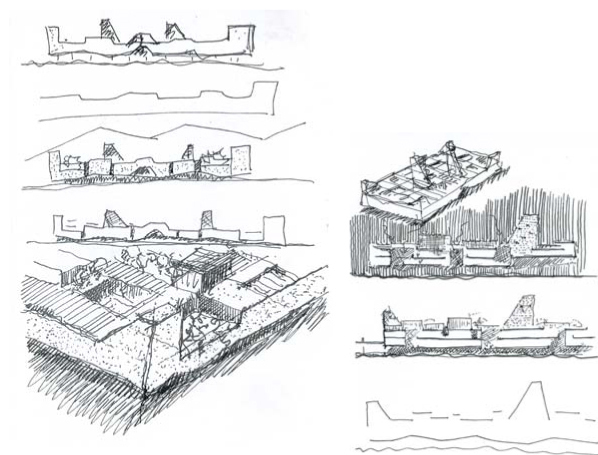 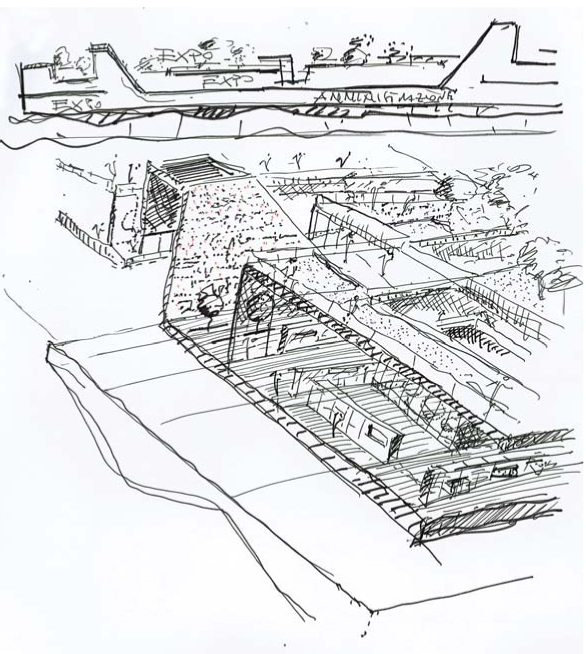 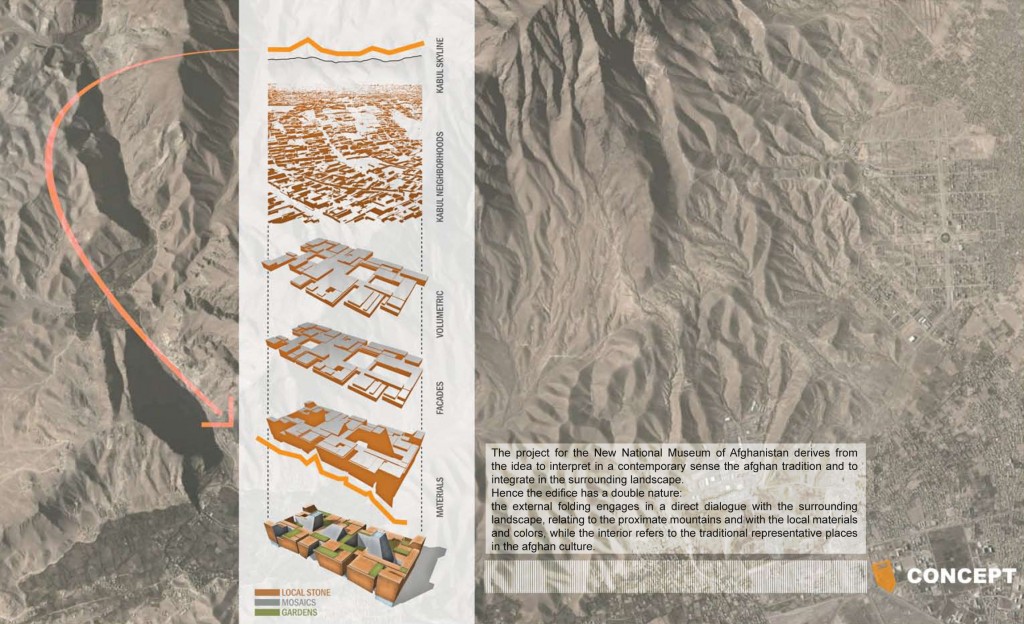 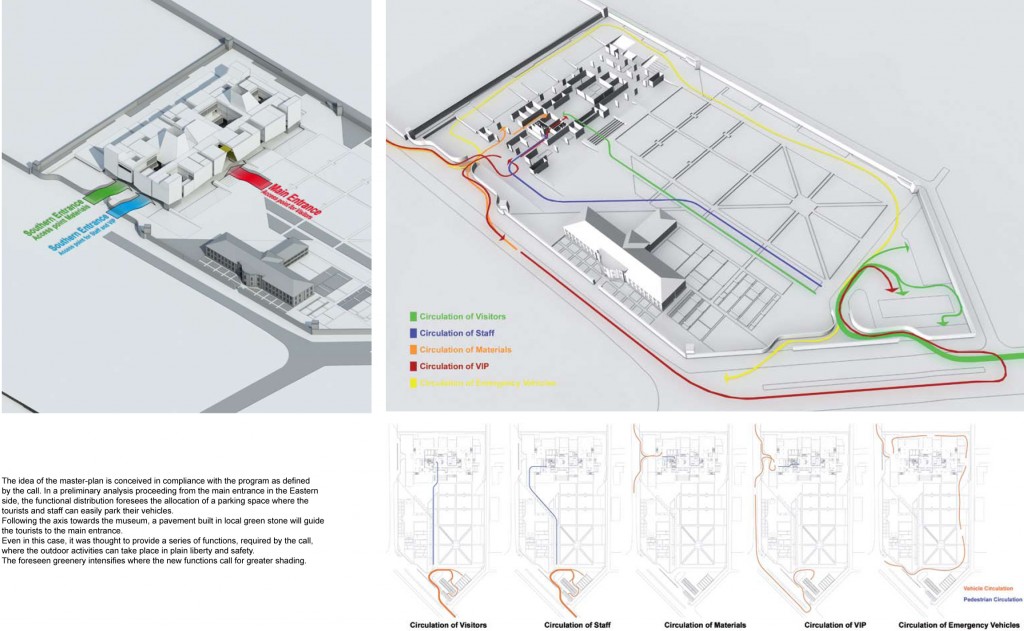 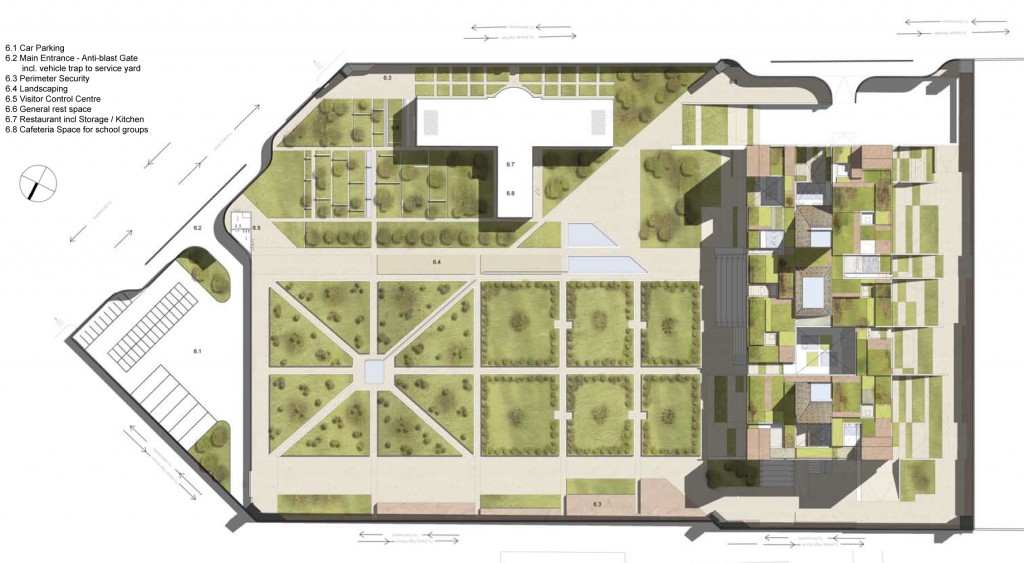 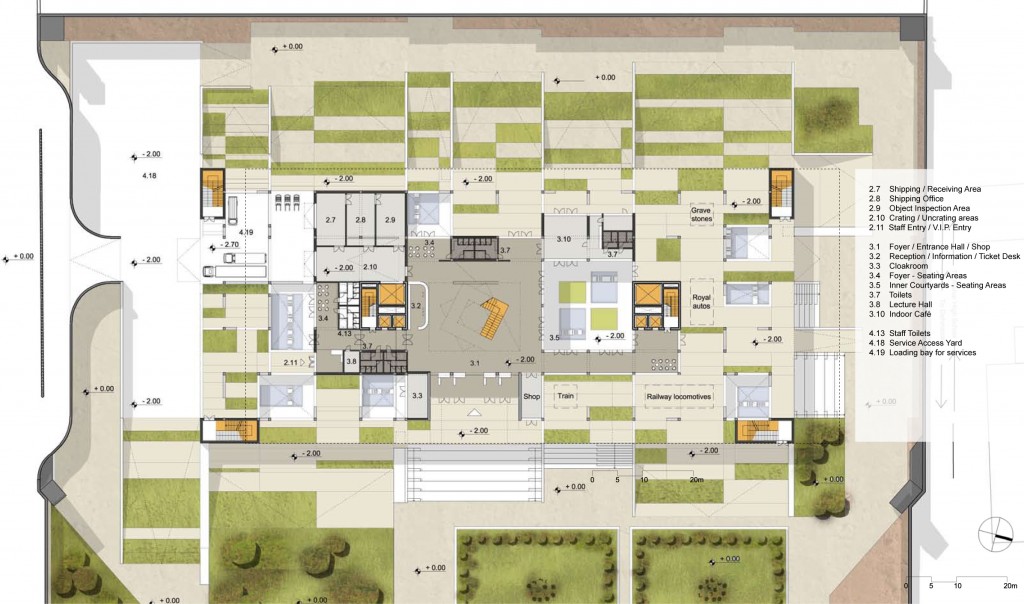 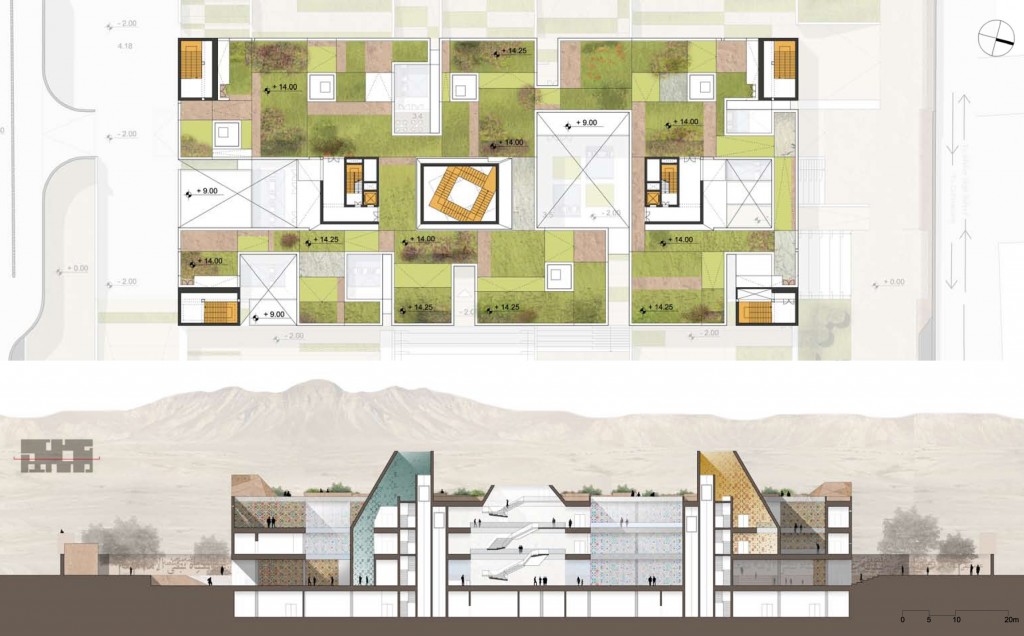 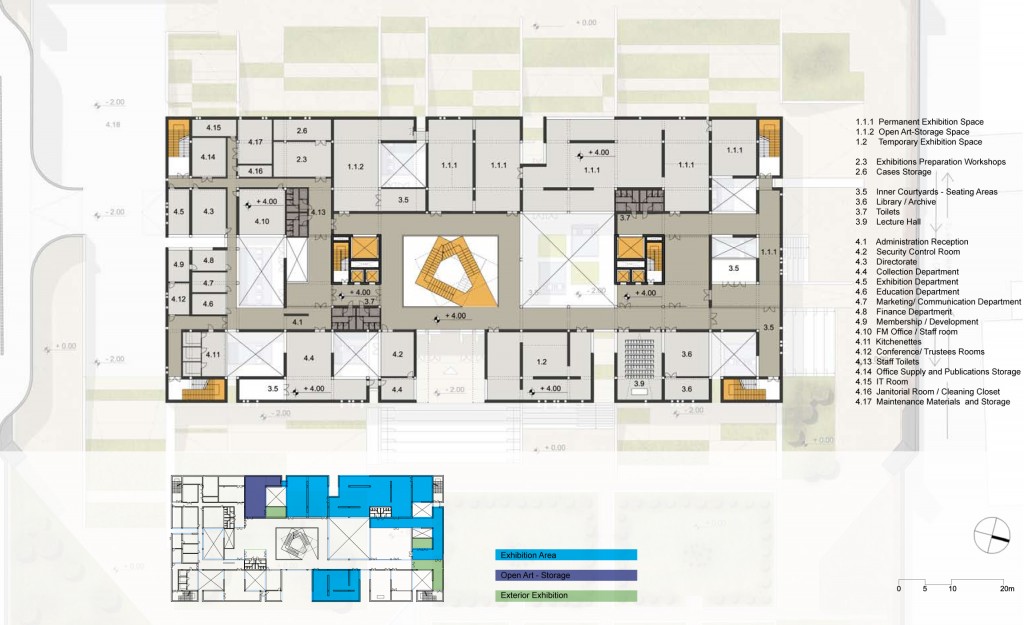 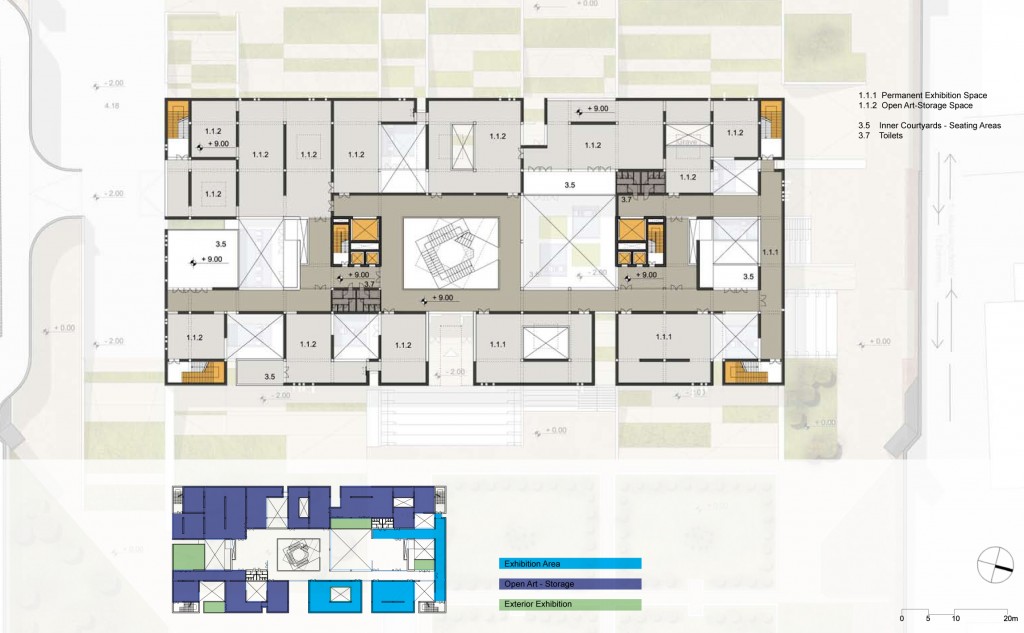 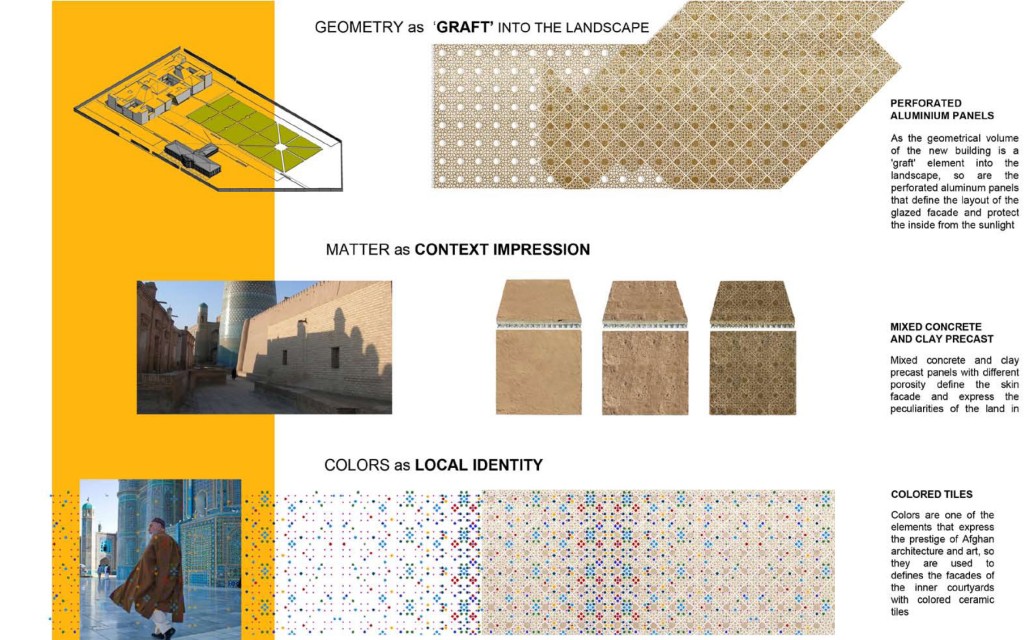 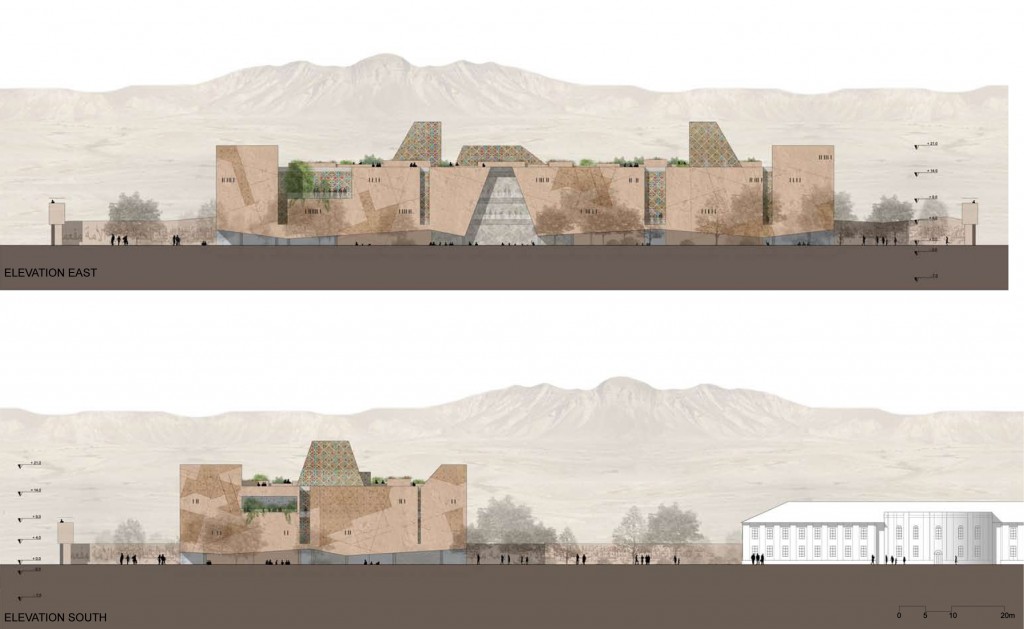 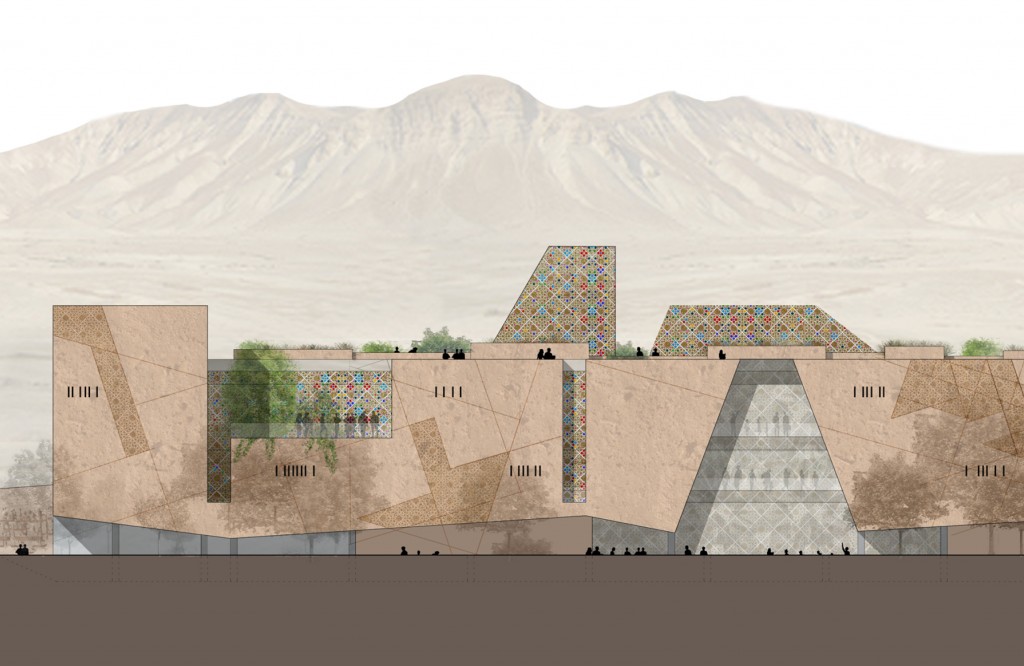 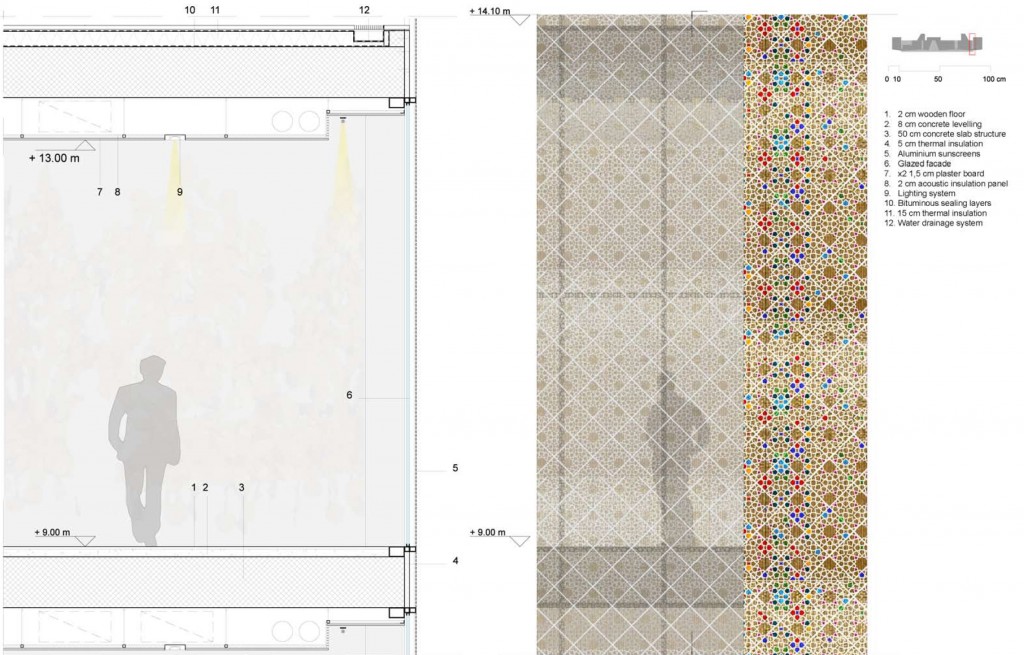 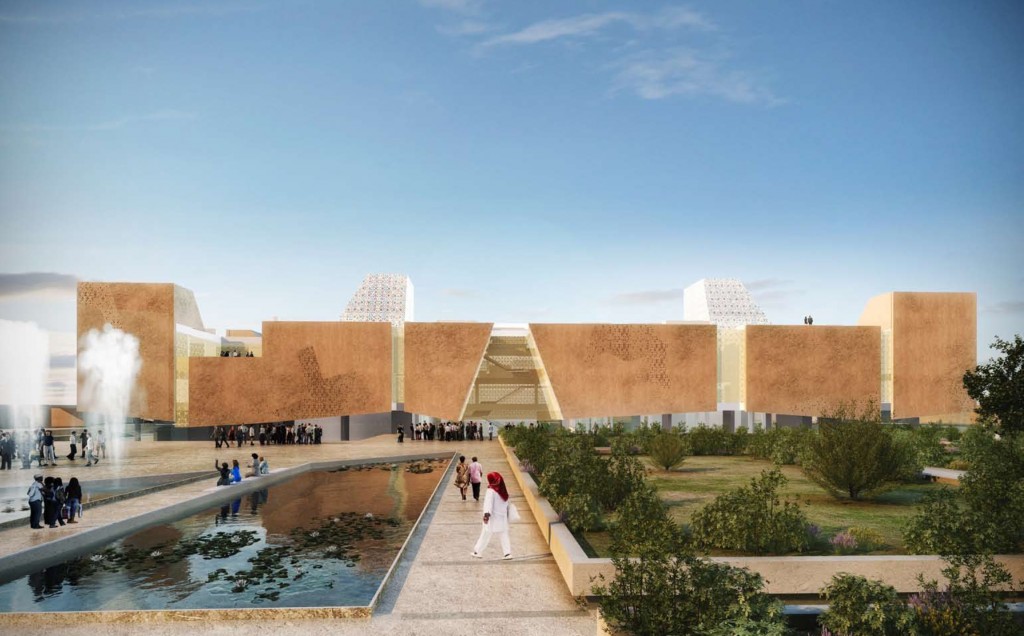 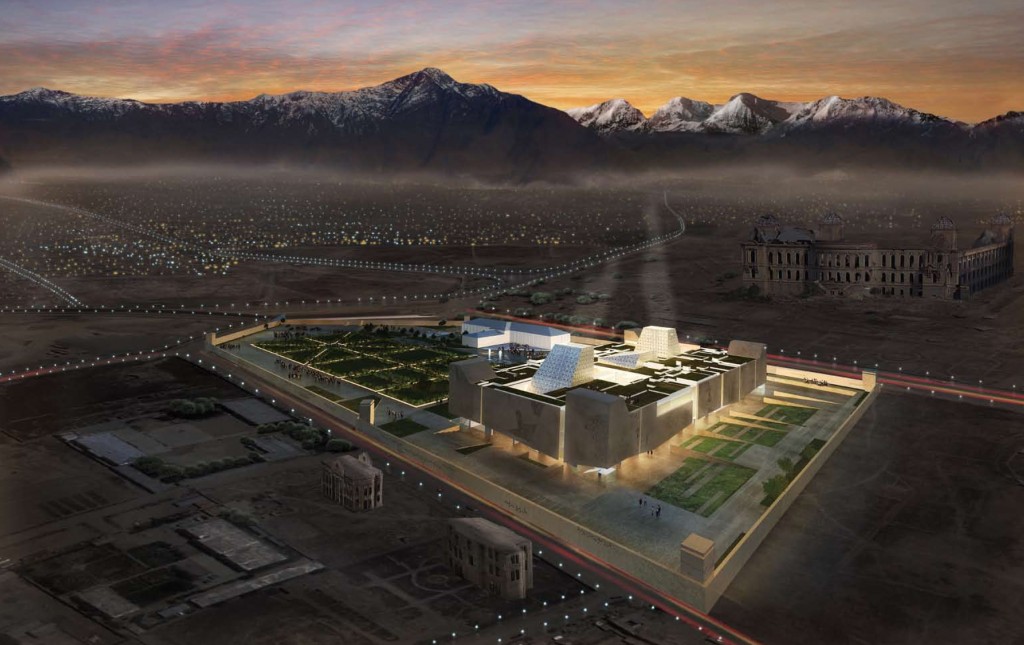 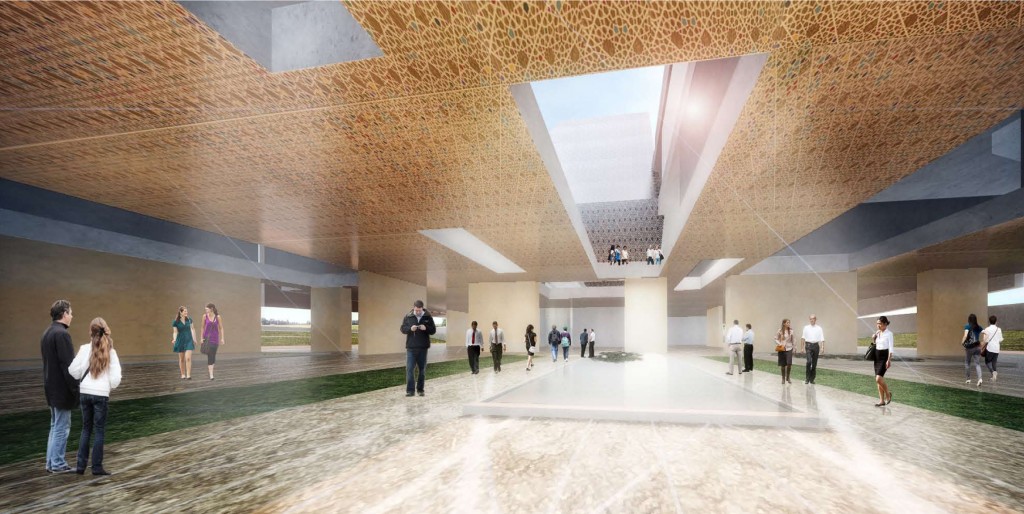